Please note: this story contains triggers for those who have had C-Sections and/or medical interventions.

On juli 17th, 1 am in the morning (amsterdam time), I suddenly began feeling a wave of pain in my back. At first, I didn’t know what it was, and I attributed it to regular back pains associated with pregnancy. I was 40 weeks +5 days at this point, but I didn’t think labor would feel this way. I kept switching sides, trying to find a way to sleep, only for the pain to come back in waves again and again.

Around 4 am I realized these pains weren’t going to go anywhere, and I knew these were the contractions, even though I could only feel them in my lower back. So at around 5 am, I woke up my hubby and told him.

We waited until 6 am to call the midwife, who came to check me. I was 1 cm dilated by that time, and we were elated. However, contractions weren’t consistent in pain or time. 😕 I decided I was going to shower half the day to catch all the contractions and hopefully speed things up. We wanted to do things as natural as we could, with as little intervention as possible, as we were aiming to do a gentle water birth. However, I already knew it was going to be in the hospital due to needing an antibiotics drip for my GBS infection. So my husband started packing all our things, including the birthing bath and ball.

We waited some more until 4 pm, after which the midwife came to our home again. She checked me, and I was still at 1 cm, at which point we were starting to doubt whether or not this birth was really happening today.

At around 9 pm, she checked me again only to find out I was a tight 2 cm. I was exhausted from the pain, which had kept me up all night and day. I needed sleep, so the midwife decided it was best for me to go to the hospital for Pethidine so I could catch some sleep. Even though I wanted things to be as natural as possible, I realized I needed the energy to birth this little boy and without sleep it would be impossible. And boy, did I sleep … and hallucinate. 😂

Around 9 am, they checked me again, and I was at around 3/4 cm’s dilated. I was happy things were finally picking up. Around 11 am in the morning however, contractions had stalled again. They were gone one moment and present the next, with no rhyme or reason. Mind you, I had only had back labor so far, no contractions in my belly.

The baby’s heartrate also proved very hard to track. This concerned the doctors, so they decided to break my water. My water contained meconium, which meant the baby was in distress. Which also meant, I could no longer get into the bath, because they were going to track him with a tracker straight on the head. This was also the moment the OB discovered my baby was headed towards the exit face first.

She could feel his eyesocket and brows.

I was moved to a bigger room where contractions picked up, but not enough to get anywhere close to what was needed. I was handling the labor by using a TENS machine only, which gives electrical pulses to your back at a rate that you feel comfortable with. Around 12/1pm the doctors decided I needed to be put on oxytocin to speed up delivery. This was far from what I wanted, but I knew it was needed because the baby needed to come out asap.

Things picked up from here. Contractions became heavy, hard to handle, even with the TENS machine. I still only experienced back labor, which was excruciatingly painful to the point where I couldn’t handle it anymore. I asked my hubby and mother (who I wanted to be there) to massage my back with their fists to apply pressure. But it wasn’t enough. I couldn’t handle it anymore. Without any means to catch the pain in a natural way (no shower, no bath, little to no walking around), I resorted to my last option, which was the epidural.

The doctors checked me again and I was at 6 cm dilated. However, the baby’s heartrate kept dropping with every contraction. So around 1:30 pm on juli 18th it was decided they were going to get him via emergency C-Section.

This was my worst nightmare. I wanted to do a natural birth, a water birth, and one by one all my natural pain relief methods had been stripped away from me … and now a vaginal birth as well. 😟

I cried for a moment, but then realized there was no point. I was going to have to deal with it. I remembered the lines from the hypnobirthing course I’d taken and recited them in my head. “I will adjust to every turn this delivery will take.” This baby was coming out, one way or another, and I wanted him to be safe and healthy. That’s all that mattered.

So they drove me and my hubby to the OR, where he stayed with me through the entire procedure. I got spinal anaesthesia, which numbed all the pain, but also my entire lower body. I could feel my legs go out, as if warm water was rushing over me and then … nothing.

It was hard to breathe. Apparently, this is normal with small people, because they place the spinal block quite high.

There was a man telling me what the doctors were doing. That they were making the cut. I could feel them pull and tug. It felt like my body was being shoved around a lot. I started shaking vehemently. The doctor gave me something to calm down (I think it was Fentanil). They needed to use a Kiwi vacuum in order to get my baby out. He was stuck in my pelvis, face up, turned with his back against my back. A stargazer with face presentation.

This is why my baby refused to come out the natural way. The doctor explained there was no way he was ever going to come out like that.

The kiwi sprang loose twice, which caused my baby to have a headache and multiple bruises as well as swelling, but they finally got him out.

My husband saw him being born.

On juli 18th, 1:41 pm Amsterdam time, my little Quinten came into this world.

They quickly brought him to a table to check him up. He wasn’t breathing. No cries. I was anxious. My heart rate shot through the roof. I couldn’t hear or see anything except a blue cloth.

Then suddenly a soft yelp. I almost cried there and then.

My husband cut the cord and then they put my baby on my chest. I could finally see him.

I only had him for two minutes. They took him away again, because he had a low Apgar score (5). My husband went with him, leaving me in the OR with a bunch of doctors who were putting my organs back into my body and suturing me up. I was still shaking like a straw.

I didn’t stop shaking until I was in the recovery room. It would take me an hour to get some feeling back in my belly. I couldn’t cough or wheeze. They gave me paracetamol and some more pain killers. The weird feeling when I was breathing didn’t stop until well after I’d left the recovery room.

It wasn’t until 4 hours after my C-Section that I finally saw my lil Quinten again. The lack of time together had taken a toll on me. I saw my little boy, but I didn’t recognize him as being mine. Had that baby been inside me? Was that my baby? Was I supposed to feel something?

I felt lost. For days. I didn’t understand his cries. Didn’t know what to do. I was waiting for that cloud nine feeling people always talk about. It didn’t come.

But I refused to give up.

I kept trying to feed him, despite my milk not coming on. I knew with C-Sections it was going to be hard, but I was not going to give up, ever.

And finally, after 2 full days, I could give some of my colostrum to him. It was a tiny victory, but enough to make me smile. 💕

After 2 days (juli 20th) we were finally discharged from the hospital. My husband had been allowed to stay with me throughout this time and we both went home with our lil boy. Our Quinten. Only when we came home did I finally feel like I could start processing what had happened. And only after a few days did I feel like I was a real mother to this little boy. My little boy.

Even though I didn’t get to experience the vaginal birth I was hoping for, the calm water birth I’d envisioned for him, I was still a mom. I’d been through 36 hours of labor and a C-Section on top. The double whammy. And I am proud I went through all that and gave birth to a beautiful little boy.

Now that I’m home, I finally get to feel like I’m on cloud nine. Each day is a little better than the one before. Despite the pain in my belly, the inability to move around my house, to walk without pain in my pelvis, to sleep on any side other than my back … I am finally falling into that cloud.

Quinten is the cutest little boy. I love him so much, and I can’t wait to see what he’ll become.

My little Quinten came into this world in his own, unique way. And I wouldn’t have it any other way. ❤ 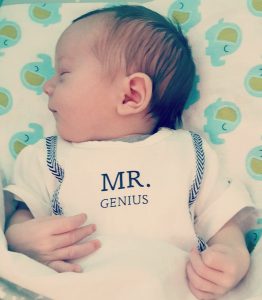