I had a tumor - Author Clarissa Wild

So there’s been a lot of stuff going on in my personal life recently. I wasn’t going to scream it off the rooftops, but it got in the way of my writing so much now that it has derailed my schedule and it has forced me to push back books I thought would be long finished by now.

Let me explain. In september 2020 I went to the doctor because of a peculiar growth in my nose that just would not stop or go away. I asked him to look at it and he couldn’t understand what it was.

You see, my son had bumped into me with his head quite harshly a week or two earlier, and after that I had gotten a lot of nosebleeds. It wasn’t too concerning with me as I figured he’d just broke a little bit of my cartilage, which was not a big deal to me (trust me, I have had broken bones, this was not important or significantly painful).

Anyway, the doc referred me to a specialist who works at the hospital, but because of the current corona crisis I was not able to schedule the appointment myself. Instead, I had to wait until they called me for an appointment. Which didn’t happen until october. And the actual specialist visit wouldn’t be until mid november.

Over the course of these 2 months the growth in my nose continued to spread until it became so huge it had blocked my nostril entirely, and I was quite worried at that point. I even managed to pick out a piece after messing with it many times (I know, you should never ever do that). I could not breathe through my nose for 2 months straight and it was giving me headaches as well as the fact that I could not sleep at night due to the apnea that it created (and me subsequently having the driest of dry mouths because I wasn’t using my nose). It had even come to the point where I permanently had to wear bandaids over my cheeks to spread my nostrils so that the growth would not impede my only functioning nostrils. Yeah, I know, fun stuff.

So when I finally go to the specialist, you can probably imagine the panic swirling through my head. Especially when she tells me it’s definitely a tumor. And I’m going to need surgery. Stat.

A tumor. The dreaded T-Word. That’s that word they use when your life is over. But I’m not nearly old enough for a tumor, right? I’m 30.

The doc called it a Pyogenic Granuloma. A tumor that normally forms on fingers after a cut or wound, sometimes on the face. Almost never inside the nostril. But considering the fact that my son bumped into my nose really harshly told her that this was likely it.

Chance of benign? 90%. But that 10% still scared the living shit out of me. Obviously, this was not the news I was looking for, but I was hopeful of my chances.

But also … surgeries scared me … and now I needed to have another one.

Three surgeries in a 4 year time span, 2 previous ones being traumatic to the point of me getting diagnosed with PTSD. Just my luck I guess.

The first one was because of my tibial plateau being shattered in 2016 which required a plate and 8 screws (I know, that was so much fun). I am officially a cyborg now. At least, that’s what my kid will tell his friends on the playground when he’s old enough, haha.

The other was his birth, which wasn’t under general, but it gave me the PTSD because it was an emergency CSection and he almost died.

I was actually still going to therapy for that and was in the process of doing EMDR, so this upcoming surgery really through a hammer into my recovery.

I asked the doc if I could have calming meds, but it turned out that those were probably responsible for my previous bad hallucinations on the first surgery so I opted not to take them, even though I knew my aspergers was going to drive me insane leading up to the event.

So after  2 weeks, on november 30th, the day arrived. Time to go to the hospital.

I was poked and prodded. Got my measurements taken and all my stats. Got my line in and had my blue apron on. Here’s a pic from right before, I was nervous AF and my heartrate was about 130. 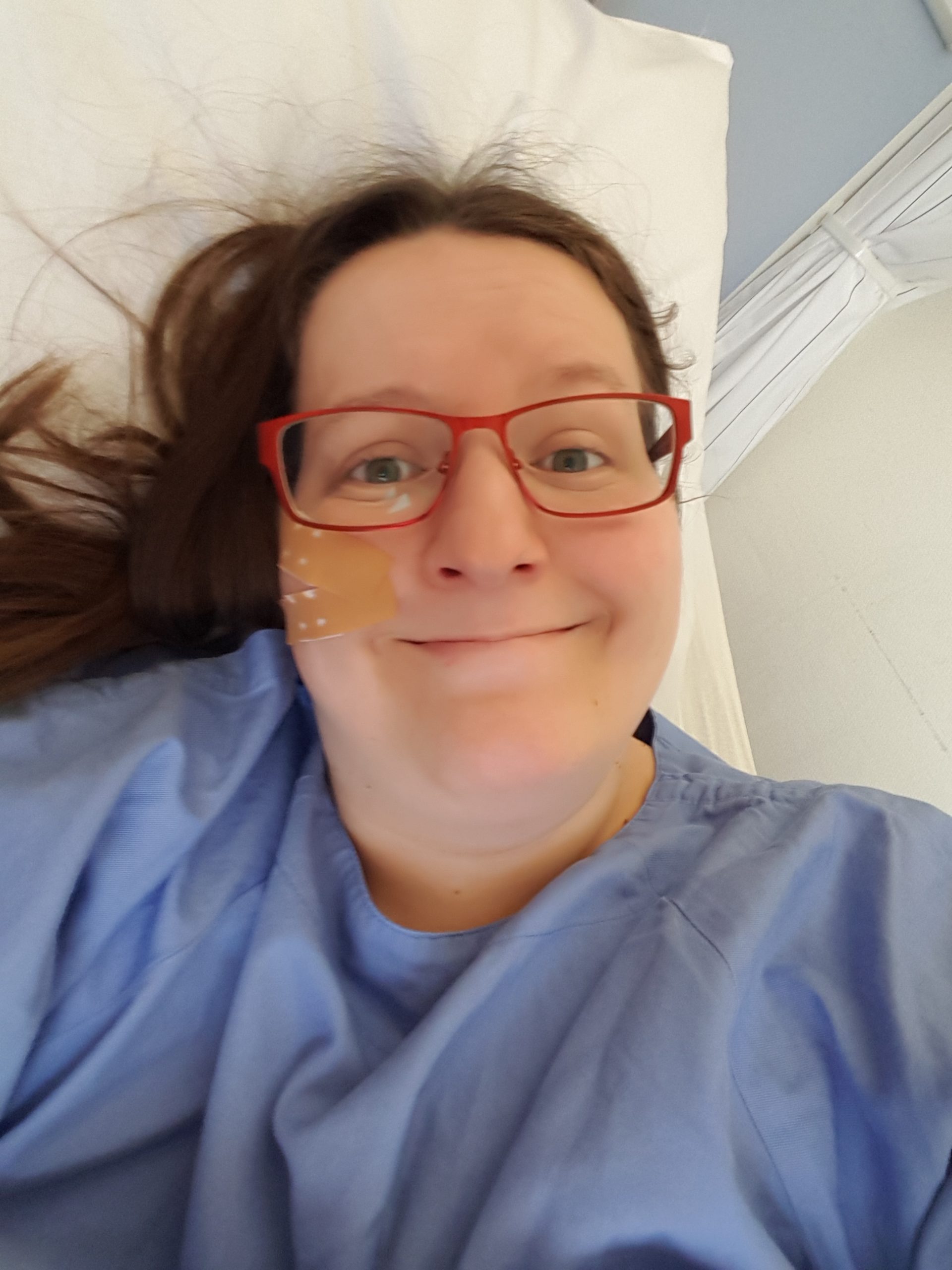 Suffice to say I was not looking forward to this surgery, even though I knew it had to happen. That tumor was gonna come out, one way or another, I needed to fucking breathe. So I went and did it.

They wheeled me to the OR and prepped me. I was so scared of having another bad experience, but lucky for me, the aneasthesiologist allowed me to bring my music into the room which calmed me enough to get through it without the use of calming meds.

She put a mask on me, told me I needed to take a few deep breaths, that I’d get a painkiller. And I was thinking about being at the beach with my mom and my hubby and my son, listening to the music, aaaandddd …

Then I was back in another room. I had teleported. OMG. It was soooo different than last time. Last time when I went under I hallucinated about falling into a black hole indefinitely with no sound, no nothing, no voice. It felt like it lasted forever and it was terrifying. But this? This was over in a second. Literally.

The icecream was also nice. LOL!

Anyway … After I’d come to I was brought back to my room again. The doc also told me the thing she took out of my nose was about the size of a grape. I also found a cute tampon stuffed up my nose 😂 Fun times. You can imagine my face at this point.

I was there for an entire day and got to be home with dinner. I didn’t sleep a lot of course, but eh, that’s what you get when you’ve got drugs coursing through your veins.

Lots of pain meds and a week further and I’m almost healed from the ordeal. There’s a big hole the size of a crater inside my nose now, but luckily everything is still intact for as far as possible. Hopefully, it won’t grow back, but we’ll have to see.

The better news is that the pathologist finally came back with the results and it was indeed benign. I DON’T HAVE CANCER!!! 🎉

I was so happy to hear that, but also, it reminded me to be thankful for what I have, and that I’m (sort of, apart from my obesity LOL) healthy. That I get to say these words, because so many people cannot. Not everyone lives until they’re 30 and not everyone lives until they’re 60. People always complain about getting old, but every time I end up in the hospital I am so hopeful that I may live to die old and wrinkly. Getting old is a gift, not a burden, and I am so proud to have made it to 30. Here’s to 30 more! 🍷🍺

And if you’re wondering … yes, more (dark romance) books are coming. I cannot tell you exactly when, but I promise they are coming, and they are being written as we speak. And if you wanna know all about the tiny details like who it’s about, some sneak peeks, and stuff like that, make sure to join my fan club group or my newsletter for first dibs! 😁